The State I'm In

Bu$h gave his 911 address…it wasn't political…yeah and the Pope ain’t religious…and Dubya ain't a liar. Here's my review on the steaming pile of garbage that wasted my time and used 911 anniversity for more evil ends... 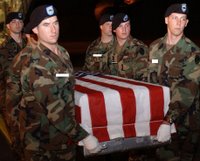 How ironic that Dubya found the time to travel to the 9-11 sites but still hasn't found time to attend a single funeral for the soldiers who have died fighting his war against Iraq. You remember Iraq? The country which never attacked the US, nor did it have the technology to do so, nor did it have terrorist training camps, or terrorist connections or WMD.

But Dubya's speech did have one thing right:
Iraq and Saddam was not responsible for 9-11.
So tell us Mr Preznut- why are we really in Iraq?
Duh. Funny that he’s still can’t explain it years later…

Yesterdays nice and improved excuse:
"He was a threat."
Period.
The end.

No mention that the first threat Bu$h sold to us was NOT TRUE!
No explanation…no specifics, no truth…
Just the Bushsh*t of 'a threat'.

You know my grandmother before she gets her coffee in the morning is a threat. Hell, my little bitty 9 pound dog could be seen as a threat when it growls!

When did America's mantra change from:
‘We have nothing to fear but fear itself’,
to:
"Be very afraid"?

But I'm not buying lies any more. How much of the mealy mouth bullsh*t double speak are we going to take before we start asking what should have been asked the day after…why?

Until we can answer that, there is no solution, no end, no way to stop it. It's time to end to the voices chanting in darkness, Pay attention! "We have nothing to fear but fear itself".
Come on Weasel Georgie, answer why?

For the rest of us-
we can’t vote the idiot out
but we can vote out the rubberstamps.
GO VOTE TODAY…because I can’t take much more of his crap.
Posted by truthsurfer