TGIF because I couldn't do another Thursday!

In celebration of Labor Day:
President Bu$h has announced he will do a recess appoint Paul DeCamp— a corporate lawyer who represented Wal-Mart and built a career fighting against unions — as head of the U.S. Labor Department’s Wage and Hour Division, which oversees “the nation’s wage and hour laws, including overtime laws, workplace discrimination laws, and child labor laws.” More at AFL-CIO Now

Yes, I'm still obsessing on Rumsfeld...it's like trying to turn away from a bad accident: 60 % of Americans: there will be more terrorism in the U.S. because of the Iraq war. That would a majority of American's that Rumsfeld thinks of as Nazi's or their appeasers...give me a break...why does he still have a job?...Shouldn't this dude be in jail? (oops did I just use Rumsfeld and 'think' in the same sentence...my bad)

September 2, last year 2oo5:
"Bu$h- One of the worse disasters to hit America" 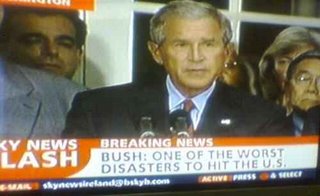 "The National Public Radio news anchor was so excited I thought she'd piss on herself: the President of the United States had flown his plane down to 1700 feet to get a better look at the flood damage! And there was a photo of our Commander-in-Chief taken looking out the window. He looked very serious and concerned.

That was yesterday. Today he played golf. No kidding."

Never forget what really happened... That Bu$hCo failed and is still failing..they even have a katrina international policy...never forget.

Download Video
"We have been abandoned by our own country," said Aaron Broussard, the president of Jefferson Parish in New Orleans. He broke down in tears Sunday as he recounted how a colleague's mother drowned awaiting rescue from a nursing home.

"Everyday, she called and she said, 'Are you coming, son? Is somebody coming?'

"And he said, 'Yeah, Mama, somebody's going to get you.

'Somebody's coming to get you on Tuesday.

'Somebody's coming to get you on Wednesday.

'Somebody's coming to get you on Thursday.

'Somebody's coming to get you on Friday,'

and she drowned Friday night."

For God's sake, shut up and send us somebody