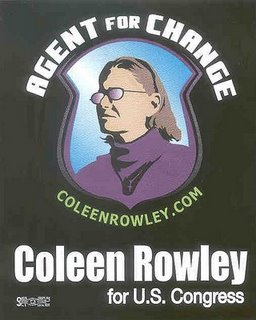 There's substance and strength within DFL Congressional candidate in Minnesota's Second District Coleen Rowley. Sure- she's not polished like a consummate politician, but give me her straight forward, 'I'm willing to stand up at the gates of hell for you and tell the devil the truth' personality over any run of the mill, milk toast Democrat!

"With no record worth bragging about, Republicans candidates are left with fear and slander. Even the National Republican Congressional Committee has admittedt hat it plans to spend more than 90 percent of its budget on negative ads. They say, 'Give up your rights, so we can protect you. Fear gays and lesbians. Fear liberals. Fear Muslims.' The president says that 'it is unacceptable to think'. Republicans across the country hammer wedge issues and divide our country."

What are they afraid of?

"Keith Ellison is a uniter. He won his primary by bringing together people of all different ages, races, religions and backgrounds, and he will help to unite our country while in Congress. Like Keith Ellison, I agree that it's time to end the U.S. occupation of Iraq. Like Keith Ellison, I believe that every American deserves access to adequate medical care. The Fifth District is lucky to have him fighting for them, and when I get to Congress in January, I look forward to working with Keith Ellison to hold the Bush administration accountable for its failures and restore our country's greatness."