Filed today under 'about damm time':
ABC News: President Bush to announce that detainees held at secret CIA prisons, including alleged 9/11 mastermind Khalid Sheikh Mohammed, will be transferred to the Department of Defense and granted protection under the Geneva Conventions. 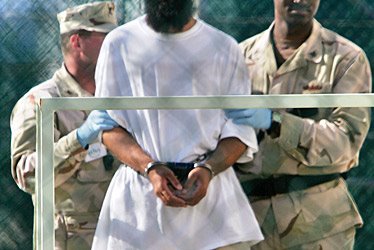 Civil-liberties advocates point out that Guantanamo's 460 inmates have few other means to make their voices heard, given that most have been detained for more than four years without even being charged with a crime. Indeed, though the U.S. has condemned the hunger strikers at Gitmo, just last year the White House haile a hunger-striking Iranian dissident for showing "that he is willing to die for his right to express his opinion."

At Gitmo, however, dead prisoners are something the U.S. military wishes devoutly to avoid. So force-feeding has been standard policy at the camp ever since hunger strikes began in early 2002. The facility's top physicians have also told TIME that prisoners who resist are subjected to especially harsh methods. In one case, according to medical records obtained by TIME, a 20-year old named Yusuf al-Shehri, jailed since he was 16, was regularly strapped into a specially designed feeding chair that immobilizes the body at the legs, arms, shoulders and head. Then a plastic tube that is 50% larger, and more painful to insert, than the commonly used variety was inserted up through his nose and down his throat, carrying a nutritional formula into his stomach