Minnesota has historically prided itself on a large voter turnout. Typically we have been among the top few states in the nation with a large voter turnout. In addition, voter fraud has been extremely rare (26 cases out of hundred of thousands of voters last election!). Naturally, the MN GOP feels a need to address this pressing and overwhelming 'non-existing state problem' of lots of voters and a statistically non-existing voter fraud of less than 100th of a percent!

The GOP propose to protect Minnesotans against this 'non-existing problem' by spending more of our tax dollars. They want to mandate voter IDs while adding ID machines to every vote location. Really?! What state are they living in? Has Minnesota become California? Where's the common sense in this kind of worthless legislation? What's not to love here...spending tax dollars on imaginary problems.
Our State budget is in need of balancing with a projected 6 billion dollar deficit, jobs need to be created and issues like the state's transportation, education and health care need have funding, but the Minnesota GOP want to mandate spending solutions for non-existing problems. Really?! What's next on their agenda? 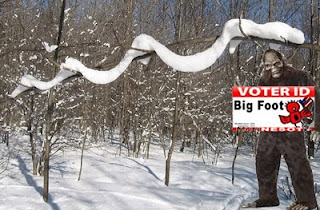 Will the Minnesota GOP address the nonexisting Snow Snakes and Bigfoot? Perhaps we'll get lucky and they will talk about killer mosquitoes. Has the minus degree frigid Minnesota weather finally turned the Minnesota GOP officially into insane fluffy pink elephants unable to address the REAL problems facing our state?
Unfortunately, if they get their way, taxpayers get the bill for their insanity of fixing what isn't broke while women will continue to reap 24% less then men...ADDRESS THE REAL PROBLEMS!!!
Posted by truthsurfer