Can Somebody Turn Down The Heat?

Am I the only one or is it getting warmer?

“Carbon dioxide levels are substantially higher now than at any time in the last 800,000 years, the latest study of ice drilled out of Antarctica confirms.” 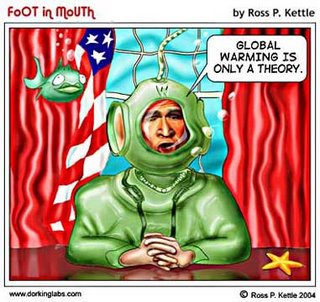 What?! Bu$hism and lies over science and global warming?

"You're talking about a president who says that the jury is out on evolution, so what possible evidence would you need to muster to prove the existence of global warming? We've got polar ice caps melting, glaciers disappearing all over the world, ocean levels rising, coral reefs dying. But these people are flat-earthers." - Robert F. Kennedy Jr., author of "Crimes Against Nature."

So naturally congress will look into....nothing. They keep quiet while the commander-in-crime continues the lies:

After a five-week summer break, Congress returns today for 19 days before ending its work for the legislative year. The only legislation being considered this week in the House “is a bill to toughen rules against horse slaughtering.

Of course, they'll try to promote legislation to 'one up' themselves over their opponents or keep their pet lobbyist's purring. But global warming? No that makes no transbuddha sense...which goes to show I'm way far gone into the purple haze of political musing and Bu$h's lies:

Will Ferrell - Bush on Global Warming on Transbuddha