Ugh...Will a hot shower and stiff drink make this image go away?! 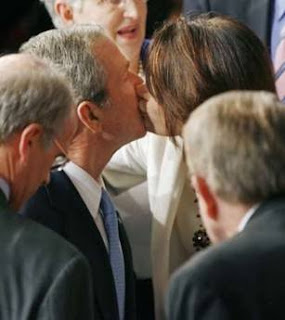 “The President and I enjoy a great relationship. When he was at the site of the collapsed bridge, he reached over because he wanted to give me a kiss when we were down at the site and I had pulled back and he said ‘What?’, you know, “You don’t want an embrace?’, and I said, ‘You know, the people of Minnesota love you, Mr. President, but I think one kiss was enough.’”
Posted by truthsurfer 1 comment:

When a community experiences tragedy like the bridge collapsing over the Mississippi River in Minnesota in August, they can pull together or go down in flames. Apparently Minnesota's Governor Pawlenty is a card carrying member of the latter group. While Minnesotans and their elected representative want transportation resolutions to ensure adequate funding and repairs, Tim Pawlenty continues to be an obstructionist.

In many ways it that kind of behavior that lead to a bridge collapsing and the resulting injuries and death. Pawlenty's failure to compromise, to raise taxes or at least set a reasonable budget that meets the needs of local government, and to find resolutions has brought us to the brink abandoning local governments and bridges falling down. Instead of calling a special session and building bridges to the future, Pawlenty once more stand in the way of progress.


Toady's Star Tribune quotes Minneapolis Mayor R.T. Rybak by saying he [R.T] is going to have to walk into the U.S Conference of Mayors meeting this weekend and tell them that while "other states are taking this seriously, but our state, where people died, is doing nothing".

Once again, Pawlenty of nothing.
Posted by truthsurfer No comments:

There's a new red hot attraction drawing travelers from all over into Minnesota. All the 'in' people want to be seen and have their pictures taken there. The multitude of travelers gather round with their camera phones clicking while they pose in front of (and inside) the men's restroom at the Minneapolis St. Paul airport!?!

Yes, travelers in an attempt to forget about the daily threat of terrorism at the MSP airport now brave other like-travelers and potential terrorist to view the notorious men's restroom (better know as the Craig's Room) with the hopes of glimpsing...what? I'm guess here but perhaps they want to be at ground zero of where the wide stance and foot tapping all started.

Still such a trip down restroom memory lane is not without risk. Who knows what sting operation is in place by local police in an effort to net more adults 'hooking up'? While crime is festering all over, rest assured the MSP bathroom is....well...sort of safe...that is. if you don't tap your foot. Who knew that was a 'signal'.

So what other signals are there? Could using the hand dryer be a sign? Or pumping the soap dispenser more than once be a sign? What if I take the time to put on lipstick? Is it possible I'm sending a message to an undercover officer that I'm looking for a lesbian lover?

This latest Minnesota tourist attraction raises some interesting quests such as...

Will the airport start charging admittance to the infamous restroom? Will there be a 'airport restroom signaling techniques for dummies' book? Who's watching the terrorist if the police are all in the restroom? Is it really a crime to arrange a rendezvous between two consensual adults while in a bathroom? Will they be posting future 'threat levels' specifically for all MSP airport restrooms?

Wide stance aside, enquiring minds want to know.
Posted by truthsurfer No comments:

Without Healthcare Reform, More Will Die

The desperate need for healthcare reform hit home last year when my husband was diagnosed with cancer...I've seen and experience things in the last year that no human should be subject to...but here's the real tragedy...we're the lucky ones...we have health insurance, a supportive family and a committed HR department where he worked...those souls that don't have these things....die...

You can sing along to the video...but for me, I'll just cry...for the shame of a 'great society' and those that it's lets die.