I've seen Minnesota Attorney Jeff Anderson speak on several occasions and have half heartily followed his crusade against pedophile priests in his own Catholic faith for personal reasons that include being emotionally/physically abused in a Catholic missionary school.

Taking on the hugely wealthy and secretive Catholic church hasn't been easy. For decades the church has systemically allowed abusers to continue under the corrupted values of its own leadership and its unshaken commitment to a sinister hierarchical power. American bishops often transferred accused Catholic priests to other parishes or dioceses after receiving allegations. But the hierarchy also moved accused priests across international borders to other countries, where they continued to work with children and were often able to evade prosecution or extradition. Jeff has attempted to get the church to acknowledge it's own culpability in these crimes while seeking justice and closure for its victims.

Now I see that Jeff is taking on those that use the internet to exploit children by downloading porn....Makes me want to start designing Jeff's superhero outfit...cape and all...He heard the call of victims and decided to fight for them...thank you!

Teabaggers and Racist Speaking Out with GOP Congress Help

The Congressional GOP in a 'not very partisan' effort to lend a forum to more racism and hate has started an interactive website "America Speaking Out". Basically wingbats and teabaggers get yet another public forum to post up and vote on their hate rhetoric.

Day one and already they are showing their racial views...one GOPer has posted: "My Neighbor is a Mexican. Please arrest him."

Below is the screen shot they get to vote up or down on. I'm sure my Mexican neighbor (who btw has lived in Minnesota longer than me and is an American citizen) appreciates the GOP for promoting white racism...way to go GOP Congress! Keep it up and I'm sure the KKK will make you all members! I guess when you have no policy or values, this is the best you can do. 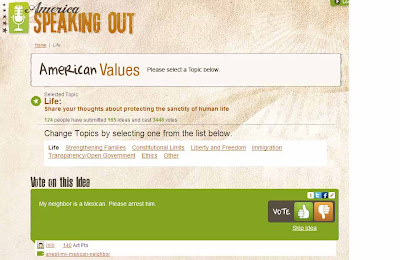 Take Action...
SEIU Press Release:
MINNEAPOLIS – Over thirty SEIU members and community supporters will gather outside Baja Sol Restaurant in Uptown to unmask the hypocrisy of corporations and their executives that benefit from the Immigrants buying their products and capitalize on cheap labor but at the same time support anti-immigrant legislation.

The group of activist will meet outside Baja Sol Restaurant in Uptown, Minneapolis at 6pm.

Tony Sutton, CEO of Baja Sol Restaurants, is also the Chairman of the MN Republican Party which endorsed Tom Emmer as their gubernatorial candidate a few weeks ago. Emmer fully supports the irresponsible and racist Arizona law SB 1070, saying that “it is a wonderful first step” and advocates for Rep. Drazkowski’s copycat bill HF3830 which demonizes immigrants and institutes racial profiling.

WHAT: SEIU members and community allies meet in protest to expose Tony Sutton for making millions of dollars selling Mexican fast food, while making millions for the MNGOP to spend bashing immigrants.

WHO: SEIU members and community allies.

WHEN: 6:00pm, Thursday, May 27
WHERE: Outside Baja Sol Restaurant on Hennepin and 22nd in Uptown

VISUAL: Workers and community activists passing out information on the hypocrisy of Tony Sutton and Baja Sol; other holding signs and banners.

What's not to love?

'My love is as deep as the ocean'…but apparently you need to get BP's permission to view the ocean and manage it’s rights. Even Interior Secretary Ken Salazar, says the government’s role is largely supervisory and the primary responsibility for the spill, for legal and practical reasons, remains with the company.

So teabaggers...how’s that deregulation working out? First the mortgage industry, then banking, then mining, and now the oil industry…I know lets ask the Louisiana Shrimpers what they think of deregulation or ‘self regulation’ .
Well here’s hoping BP isn’t another slick operator but with profits from the first quater of 2010 already 135% higher than last year...apparently the ocean isn't as deep as BP's pockets.

Timmy To Be In Minnesota!

Wow--talk about shocking...Timmy will actually be in Minnesota for a few hours and not just to fish!

The Humphrey Institute’s Center for the Study of Politics and Governance will host a forum with “Meet the Press” for part of its Across America series– special discussions with key political and community leaders–at 4 p.m. on Thursday, May 27, at Ted Mann Concert Hall. Registration is required.

Drill baby Drill. Sure it's a big ocean mixed in with a little oil...my bp! You know I saw him speaking on TV the first week of the spill. He seemed genuine and a little shell shocked...now he just seems out of touch and arrogant. By the time the oil has stopped spilling, he will had made a fortune while we lose so many treasurers.

What? We still don't ask, don't tell. How long have Democrats been in office? I'll get a cup of coffee while you google that one...Truth be told, I'd have a lot more respect for her if...she came out against this when she first held elected office in the 1980's.

Inclusion is about diversity and equal opportunity. Rand Paul apparently skipped that part of education but then considering who dad is, the apple didn't fall far from the tree! He's going to make a fine Tea party warlord someday!

End This War! One thousand American troops are dead in Afghanistan. This has taken on a mad hatter reality of a sacred golden calf...END IT! On a personal note...if Rand Paul is elected, those who make it home disabled won't be welcomed everywhere!

Yes Sir, Can I Have Another?

Bad Newspaper Reporters Rarely Get Fired!
We all know 'the strib' stopped functioning as a news organization with real resource and information...but even I was surprise at the depths it has fallen to...please read Rob Levine's post at the Clucking Stool...and weep for newspapers that once presented the truth in the form of news...but is no more...

So the very premise of the Strib's story "..bad teachers rarely get fired," first, isn't true, and second, is a meaningless statement given the methods used to hire teachers. The experts the story cites to justify its attitude turn out to be right wing operators who have been attacking teachers' unions for decades, only the Strib doesn't tell its readers this crucial fact. Nevertheless, reading the story, and the comments from readers, it is clear that it will be believed, and added to the arsenal of falsehoods used to attack teachers' unions.

Time To Turn The Table?
Who's in charge of this disaster and why? It's time to stand up, push back and just say no to Pawlenty. The UpTake has video of Sen. Marty calling out Pawlenty : "You broke the law...now it's your turn to fix it." But my question is...why aren't everyone of our representatives doing the same? Get loud, demand Pawlenty does his job or step down!

"No we're not going to take this anymore, Governor it's your problem, you broke
the law, we offered a solution and you broke the law rather than respond to
that. Now it's your turn to fix it."

It's been 40 years...but seems like the message isn't getting out there...more wars, more dead...