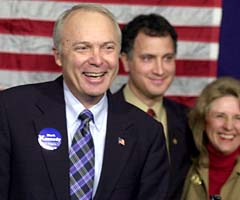 A startling truth from the Strib today:

Defeat this November is the deserved consequence for every incumbent member of Congress who has sung with gusto the bunting-draped "We'll fight them over there" chorus that was written and produced for them by the White House. Two especially deserving of that consequence in Minnesota are Rep. Mark Kennedy, who is running for the Senate, and Rep. John Kline, who is running for reelection.

Kline's behavior has been especially contemptible because he is a retired Marine officer. It's difficult to comprehend that someone of that background would demonstrate so little regard for the troops that he would vigorously support sending them to fight and die in a war that puts their nation at risk.