Delayed since 2001, it looks like there will be at least one more year delay to repairs scheduled to Hwy 62 (Crossroad Commons) because of Governor Pawlenty.

The repair is estimated to cost 250 million dollars but Pawlenty wanted contractors to 'put up' front money of 96 million that the state would pay back to them later. Really I guess that's a sweet deal for the state, that is, if you can find a contractor...er sucker...willing to underwrite half the cost of the project. Problem is: not one contractor was willing. Not a single road contractor bid for the 250 million dollars contract for Hwy 62.. 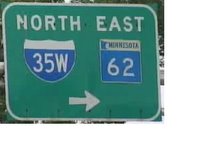 Maybe it's time to rename all of Minnesota's potholed and congested highways "Pawlenty's follies". Unfortunately Minnesota now has so many roads like this, if we named them all, we would just drive around in circles...er..that is when we can move around. Most times we'd be sitting in our cars, waiting and buring up gas while cursing another shortsighted lack of leadership move by our governor that leaves Minnesota's citizens stranded on:
'Highway's to Hell'.
ACDC
Livin' easy, livin' free,
Season ticket on a one-way rideAskin' nothin',
leave me be,Takin' everything in my stride
Don't need reason, don't need rhyme,
Ain't nothin' I would rather do
Goin' down, party time,
My friends are gonna be there, too

No one stop signs, speed limit,
Nobody's gonna slow me down
Like a wheel, gonna spin it, Nobody's gonna mess me 'round
Hey Satan, payin' my dues,Playin' in a rockin' band
Hey momma, look at me,I'm on my way to the Promised Land Whoo!