Zarqawi's Death
...Not in my name 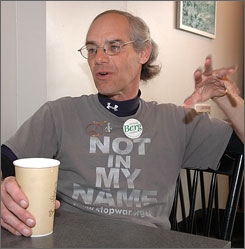 suffering of far more families if we would impeach George Bush today and end this war today...Any loss of human life is a loss for all of us...In Zarqawi's case, it's a double loss. Not only was he a human being who has parents who are suffering in the same way that my family and I have suffered, he's also a political figure, and his death is going to reignite the next wave of revenge - revenge that Zarqawi participated in, revenge that George Bush participates in, revenge that goes back to prehistoric times. It never solves anything."- Michael Berg, father of contrctor Nicholas Berg, who was beheaded in Iraq. It is believed that Berg was killed by Zarqawi's hand (USA Today)

So 'Zarqawi' is finally dead. Zarqawi is killed but Iraqis aren't celebrating in the streets- worries over electricity, water, death squads, tests, corpses and extremists in high places prevail for now.

As long as foreign troops are in Iraq, resistance or 'insurgency' will continue- why is that SO difficult to understand? How is that concept a foreign one?"A new day for Iraqis" is the current theme of the Iraqi puppet government and the Americans. Like it was "A New Day for Iraqis" on April 9, 2003 . And it was "A New Day for Iraqis" when they killed Oday and Qusay. Another "New Day for Iraqis" when they caught Saddam. More "New Day" when they drafted the constitution… I'm beginning to think it's like one of those questions they give you on IQ tests: If 'New' is equal to 'More' and 'Day' is equal to 'Suffering', what does "New Day for Iraqis" mean?How do I feel? To hell with Zarqawi (or Zayrkawi as Bush calls him). He was an American creation- he came along with them- they don't need him anymore, apparently. His influence was greatly exaggerated but he was the justification for every single family they killed through military strikes and troops. It was WMD at first, then it was Saddam, then it was Zarqawi. Who will it be now? Who will be the new excuse for killing and detaining Iraqis?

Now- who needs to be killed to stop the Ministry of Interior death squads and trigger-happy foreign troops?

Impeach Bush yourself! This is much more than just a petition.

There's a little known and rarely used clause of the in the rules for the House of Representatives which sets forth the various ways in which a president can be impeached. Only the House Judiciary Committee puts together the Articles of Impeachment, but before that happens, someone has to initiate the process.

That's where we come in. In addition to the State-by-State method, one of the ways to get impeachment going is for individual citizens like you and me to submit a memorial. ImpeachforPeace.org has created a new memorial based on one which was successful in impeaching a federal official in the past. You can find it on their website as a PDF.

You can initiate the impeachment process yourself by downloading the memorial, filling in the relevant information in the blanks (your name, state, etc.), and sending it in.

More information on the precedent for submitting an impeachment
memorial, and the House Rules on this procedure, can also be found at
the above address.

If you have any doubts that Bush has committed crimes warranting
impeachment, read this page:

If you're concerned that impeachment might not be the best strategy
at this point, read the bottom of this page: