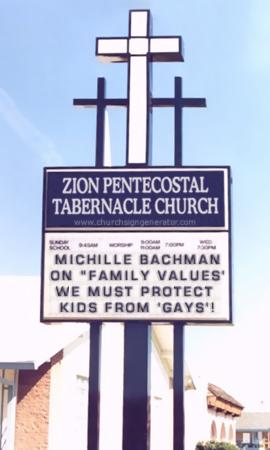 Vice President Dick Cheney was in town fund raising for local republican candidate Michele Bachmann better known as an obstructionist chalkful of ideological bombs. In other words she's all Minnesota wingbat with no Minnesota's values.

MnPublius blogged: "One of her arguments is that the traditional family is under attack. I wonder, what does she think of Vice-President Cheney's family? She'll gladly keep her mouth shut, I imagine, as long as he brings in $250/head."

So what is it? Cheney has openly supported Mary, his gay daughter. Is that acceptable behavior to Bachman? As long as she rolls in the $$$ to hell with her 'family' values! Are her values and beliefs only as deep as her campaign fund?

And what about Cheney? Does he really want to fund raise for Minnesota's anti-gay icon? Talk about an unholy alliance! Is there nothing these folks won't do for the 'cause' and to stay empowered?

And since were asking questions, who pays for all the state troopers used to shut down the highway when Cheney travels to/from these GOP fundraisers? I know I didn't enjoy waiting in traffic at rush hour. And why was this fundraiser outside Bachman's district?
Posted by mnsky