It seems like just last week it was Friday! Deja Vu..Enjoy...

Deja Vue America:
It's official America is now a police state.
And in case you had doubts...

Deja Vu Conventions:
Our DFL Convention:
Packed and up to our necks in Democracy,,,1225 delegates on Friday!
even the greenies and meanies dropped in for visits...

Their (Republican'ts) Convention:
No one showed up...
True story, a young DFL college leader I know has a grandma who's a life long rethug. She stopped driving last year due to her health. My friend was afraid he would have to drive granny because she was a delegate to the rethug convention. When he mentioned it to grandma, she said "Heaven's no, I don't need to go! They've already done everything anyway"

So much for inclusiveness and team work. No wonder the place is empty. 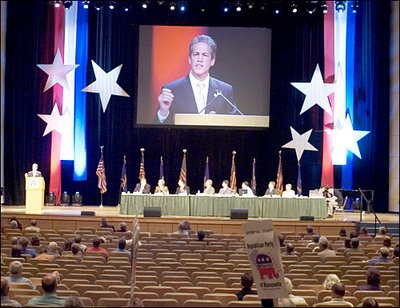 Deja Vu Iraq
''Terrorists can strike and can kill without warning before the forces of order can throw them back. And now he has struck again. At this very hour, a second wave of terrorists is striking the cities. Our forces are ready. I know they will acquit themselves, as they always have, however tough the battle becomes. There has never been a finer fighting force wearing the American uniform than you." Lyndon Johnson (37 years ago)

Deja Vu Bu$h
Another milestone in a long and growing resume of milestones.
Posted by truthsurfer

The police not knocking before entering during the execution of a lawfully obtained search warrant does not make this country into a police state.

Get back to me when there are no warrants required. THEN we will be in a police state.

Well I guess you have a point and given that under Bu$hCo we’ve seen:

Massive NSA warrantless wiretapping of …us, and

USA casting aside of the Geneva Convention and the Conventions Against Torture…., and

Enormous ndermining of American's international legal norms and treaties and protocols…, and

Voting obstructions to dampen and stop voters particularly of color, or poor, or student populations…, and

Church rights (Christian) now rate before citizen’s civil rights by allowing a growing theocracy within all levels of our government…, and

Continues to use their ‘theocracy’ to dictate ‘rights’ for patients and quality of life issues…, and

Allows for the indefinite retention of anyone including US citizens without charges or trail in the name of NS…., and

Bu$h placing himself above the law by intentionally not upholding the constitution of this country...

The lost of freedoms is seldom overnight, they occur one right at a time. The Bu$hCo administration has presented the American people with a false choice; it is not necessary to forfeit our civil liberties to be secure, nor will we enhance our security by doing so. We can treat immigrants respectfully without tolerating the presence of would-be terrorists. We can protect the privacy of law-abiding citizens without turning a blind eye to terrorist conspiracies. We can respect the rule of law without releasing terrorists onto the streets. We can even hold the police to a higher accountability in the effort to avoid becoming a police state.

When they enter your house without knocking, get back to me.