The Bu$hCo administration is moving toward Iran. Getting physically closer everyday. This briefing paper Iran: Consequences of War provides a comprehensive analysis of the likely nature of US or Israeli military action that would be intended to disable Iran’s nuclear capabilities. It outlines both the consequences in terms of loss of human life, facilities and infrastructure, but also the likely Iranian extensive responses.

Don't believe the U.S. is headed that way? Then how do you explain: 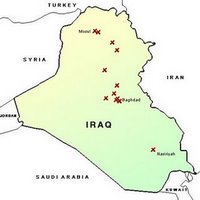 Immediately to the west of Iran, the United States is building permanent military bases. . . To the east, Iran sees the United States firmly ensconced in Afghanistan, with two permanent bases now established at Bagram near Kabul and at Kandahar . . . Moreover, a large new military base is being developed near the western Afghan city of Herat, close to Iran’s eastern border with that country. Finally, the United States has developed close military links and, in some cases, basing facilities in a number of countries to the north and east of Iran, especially those close to the Caspian Basin oil fields or pipelines that bring such oil through to Black Sea or Mediterranean ports.

The House and Senate went on record opposing permanent bases, but now the Republicans are trying to sneak them back in in the middle of the night by attaching them in the middle of other bills. Fortunately one was caught last week and deleted.

The Republicans willingness to abuse the legislative process is clear evidence of their unwillingness to level with the American people about their plans for Iraq and Iran. Instead of just asking 'when will it all end?', perhaps we need to also ask 'where will this all lead to?'.
Posted by truthsurfer