Mr. Bu$h Has An Immigration Wedgie

"As a nation that values immigration and depends on immigration, we should have immigration laws that work and make us proud," Bu$h said. "Yet, today, we do not."

..."Between 1999 and 2003, worksite enforcement operations were scaled back 95 percent by the Immigration and Naturalization Service, which has been merged into the Homeland Security Department."

The number of employers prosecuted for unlawfully employing immigrants dropped from 182 to four, and fines collected declined from $3.6 million to $212,000, according to federal statistics.

If you don't enforce the laws you have, how do you know they don't work? 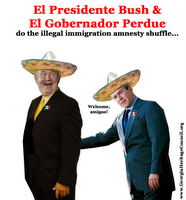