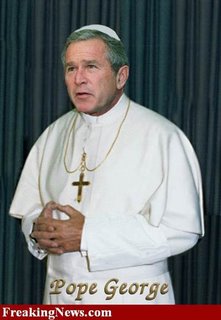 Quick Quiz: Bu$h or Alice?
"If I had a world of my own, everything would be nonsense. Nothing would be what it is, because everything would be what it isn't. And contrary wise, what is, it wouldn't be. And what it wouldn't be, it would. You see?”
___
The Senate Judiciary Committee heard testimony from Steven Bradbury, head of the Justice Department’s office of legal counsel. When questioned on whether the Preznut’s interpretation of the Hamdan case was right or wrong, Bradbury replied,

“The President is always right.”

Bu$hCo's whole infallability thing is more than a little creepy. It reminds me of cult like behavior. That's the thing - they've really blurred the distintion between 'reality' and their fantasy lies, presenting a mixture of both as 'facts'. Maybe this is the start of a papal presidency like government starring the infallable Pope Bu$h aka white rabbit.

Think of it, the Preznut is responsible for administration and leadership that is (or use to be) limited by both the Constitution (as defined by the Courts) and the Congress. He doesn't have the power of the purse strings, he can't make laws, and he can't substitute his judgement for that of the courts in matters of law or criminality.

But you wouldn’t know that from the behavior of Bu$hCo, the media, and his cult-like brainless followers. He's seems to have been ordained...I guess I missed it but I hope to attend the tea party.