If you follow Kabbal there are signs and omens in every number. While I'm not a Kabbalist, I've always found numbers interesting and think the following spell out trouble...

3.04, The soaring gas price per gallon. Way up and doubled since Bu$h took office.

7 seconds, Bu$h attention span if it doesn’t include violent military action or sagebrush.

19 minutes…Defines most parenting as just another fast food like concept! I'd like to see a comparison to the time Bu$h spends vacationing while in office.

400,000 embryos languishing in storage tanks at fortility clinics in the US.
- 28 is the number of pregnancies that will result from these embryos.
- 0 is the number of embryos that Bush will allow for scientific research.
- 399,872 is the number that will be eventually thrown away by Bush's policy of life. 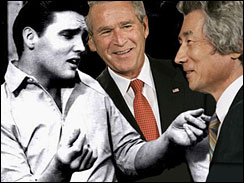 50 Million, What Elvis (yes even dead!) still earns a year. Not sure Bu$h can take credit for this but I'm sure he'll try. Must be nice to use airforce one to get to graceland, and then have a private tour.

2 Trillion, New Updated Cost of the war.
Posted by truthsurfer