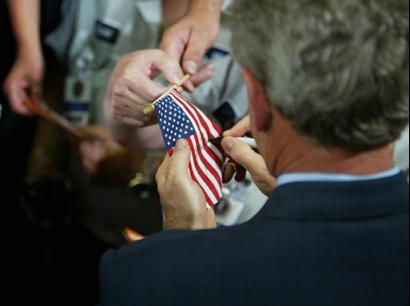 Why is everyone so upset about desecration? When was the last time you actually at a flag-burning or saw one being burned? Don't we have some really important issues that actually affect us like affordable healthcare, war, the deficit...Even Dubya has desecrated a flag or two (see photo)

According to David Corn, Senator Orrin Hatch, the Utah Republican and lead sponsor of the constitutional amendment banning flag desecration, this issue is a burning one (pun intended!). His response:

"It is a vital matter. Why? Because it was necessary to "send a message" to the Supreme Court. And what's the message? "You cannot usurp the power of the Congress of the United States."

I see. This is not really about safeguarding the Stars and Stripes. This is a spite match. Congress several years ago passed legislation to ban flag burning. The Supreme Court ruled, you can't do that (because that would infringe on free speech rights). So now Congress had to strike back.

So Hatch is saying.,..it personal.. But if that's true, then why does Congress (and Hatch) not seek to pass a constitutional amendment every time the Court overturns a law? The GOP effort to win congressional approval of this proposed constitutional amendment--months before an election-seems related to issues other than ensuring the right checks and balances. Care to guess what they are?"