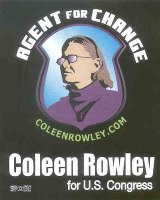 For the first time, I attended the local Drinking Liberally group last night. Something always interfers with going but since Coleen Rowley was going to be there, I decided it was time to see what it was all about.

I surprised at how warm a reception the group gave. This is one big group of activist, bloggers and philosophers. I will definately make the time to attend in the future. Besides, the beer was great.

"So Spotty says all you Democrats, progressives, environmentalists, and true supporters of our military, go over to her site and contribute some money to Coleen Rowley."

Across the Great Divide

"But perhaps most important of all, she is the person who can enumerate every single one of her opponent's failings and dangerous leanings, and when challenged why she doesn't go after Kline even harder, she quotes Martin Luther King about hating the sin, but not hating the sinner.

And you actually believe this came from the heart"

Coleen speaks the truth so quietly powerful that every day her ranks are growing, but like all campaigns, money is needed to win...take the time to donate to the Agent for Change in CD2.
Posted by truthsurfer

hey there! you can earn as much as me if you go to this webby and sign up! go check it out! http://www.emailcashpro.com/?r=suisyola

Damn, I don't remember seeing any seegar-smoking grannies, but if you say you were there....

Hope we got a chance to talk but I only met two new attendees and neither had cigars.