"They were told to leave"

Leave how, where? It’s not like they have cars, access to money to travel, mass transit or even have anywhere to go. Hell, it took over three weeks to get Americans out!. Hiw and where do you want the 750,000 people to go? 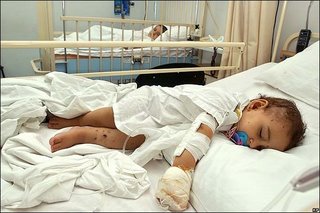 "They are used by terrorist as shields"

Yeah, in a mall, in the basement, the safest place they could find, there were no soldiers, army, terrorist..just families with children...lots of children.

"Hezbollah munitions stashed in or near them caused the building to fall."

And I''m the queen of spain...er..okay reporters with video everywhere, so where's the proof? If this doesn't stink of USA misinformation corp then the pope isn't catholic.

"We can’t have a crease fire or peace treaty because it will just be broken. We need a lasting settlement."

Right, peace doesn’t happen until Rice-a-roni has the proper paperwork signed off on! Without the USA leveraging an immediate creasefire, this situation will continue to deteriorate. Either you demand a rapid crease fire and work during the interim for peace or you're a partner to this kind of violence. How long are civilians to wait for the paperwork on a 'lasting settlement'...it's already been 9 thousand years?

British Foreign Office minister Kim Howells to BBC in Beruit: "I very much hope that the Americans understand what's happening to Lebanon. The destruction of the infrastructure, the death of so many children and so many people. These have not been surgical strikes. And it's very difficult, I think, to understand the kind of military tactics that have been used. You know, if they're chasing Hezbollah, then go for Hezbollah. You don't go for the entire Lebanese nation."
Posted by truthsurfer