Kline Needs To Address These Questions

Fact 1: When you call the Kline Congressional campaign office and ask for Marcus, they offer to put you through to his voice mail.

Fact 2: When you call Kline's Congressional District office (same building) and ask for Marcus, they also offer to put you through to his voice mail.

Does Marcus work for both offices?...Must get confusing keeping his official state duties separate from his anonymous blogging duties...or does he? Does he clock out of one office and walk over to the other and clock in there? How is his payroll being kept separate...or is it? What else has Marcus been doing and has it been on the taxpayers dime? 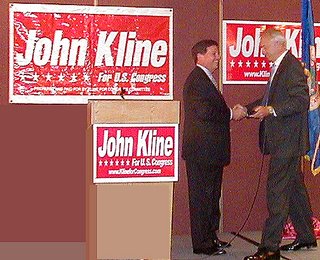 Kline's office is aware of his staff anonymously blogging...so what is his response? If not Marcus, then who was blogging? Kline? Hello, anybody there?

PS. Picture of Kline and Delay. Kline still has $30,000.00 in tainted money from Delay's PAC. Wonder when (if) he's giving it back ?
Posted by mnsky