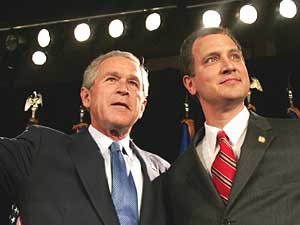 In his new ad campaign Mark Kennedy tells us to sit back and learn a few things "About Mark".
So I did and here is what I learned:

Mark has no shame about lying to Minnesotans telling them, he's 'independent' of any one 'party' or 'person' in Washington. To believe what he tells us several times during his ad, you would have to forgot what he's done during his career in the House. No amount of saying one thing but doing another changes the facts.

Mark Kennedy has proven himself to be one of Bu$h's lapdogs by lifelong voting record that supports Bu$h 95% of the time.

So why the big Mark Kennedy lie about being independent? According to the Washington Post: No modern political party has weathered a midterm election with a president as low in the polls as George W. Bush. With polling that low, Kennedy is trying to distance himself from his record. Is it too late for Mark Kennedy to re-invent himself? You betcha!