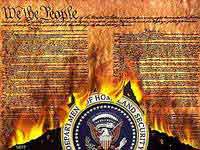 ...One For Americans, Another For The Preznut
It must be nice to be above the law.

"...President Bush doesn't bother with vetoes; he simply declares his intention not to enforce anything he dislikes. Charlie Savage at The Globe reported recently that Mr. Bush had issued more than 750 'presidential signing statements' declaring he wouldn't do what the laws required. Perhaps the most infamous was the one in which he stated that he did not really feel bound by the Congressional ban on the torture of prisoners.