"The president directed that no one involved in the investigation have access to the documents under seal and that they remain in the custody of the solicitor general. Bush's move was described as an attempt to reach a cooling off period in a heated confrontation between his administration and leaders of the House and Senate."

Ahhh, I get it now,
According to 'Comments from Left Field' it's all about protecting the guilty:

Turns out, we now learn, Hastert's under investigation for putting the clamps down on a Native American tribe's casino bid shortly after receiving 26 Big Ones from a fundraiser held by Jack Abramoff (who was representing competing tribes opposed to the new proposed casino).

This also explains Hastert's recent support for "English only" legislation --- apparently he believes, under that bill, no one can legally utter quid pro quo. 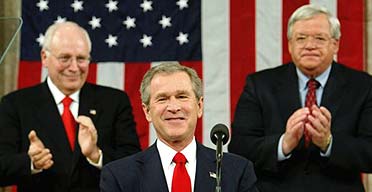 See no, speak no, hear no truth.