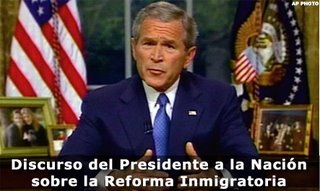 Strangely both Kline and Powerline are quiet on this verses the bill making English the official language of the USA.

"My Congressman, Col. John Kline, is a long-time advocate of legislation establishing English as the country's official language. The principle is sound, but the question is, will the legislation make any difference? To the extent that we still hear, "Press 1 for English," the answer may be No." Powerline:

Pander \Pan"der\, n. Pandering:To play the pander for.
[1913 Webster] to pander to
To appeal to (base emotions or less noble desires),
so as to achieve one's purpose;to exploit
(base emotions, such as lust, prejudice, or hate).
Posted by mnsky