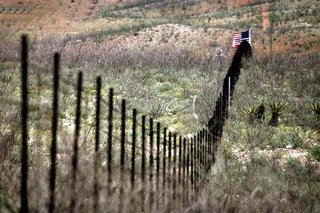 Follow the Money:
Wonder who will get the no-bid contract to build the fence? Halliburton? What ought to shock and terrify every American is that KBR, a Halliburton subsidiary, was awarded a $385 million contract to build "temporary detention facilities" in case of an "immigration emergency". Don’t be afraid, be prepared?!

What will the fence do?
Here:
Simple, it makes American citizens feel protected, and gets people elected, without actually stopping the flow of migrant workers

There:
Crossings will become more dangerous. More deaths will be attributed to drowning, dehydration, and being run over by automobiles as illegals moved into the desert to avoid official ports of entry. Look for more immigrants to take more risks because of the fence.

How will we maintain it?
It will be like constant bailing of water in a sinking ship to keep the fence from being torn down, cut open, or trampled over. Naturally, it will take more contracts to keep it in repair (see follow the money).

In addition Border Patrol agents will have more and more rescue operations (higher cost) because illegals will have to get into the country by riskier means. Last year there was over 1500 rescues in the Tucson Area alone.
Posted by truthsurfer