Have a great Cinco De Mayo and Weekend...
Here's the hoot:

Tomorrow:
Five top reasons to attend the CD2 Convention this weekend at Faribault HS:
and the number one reason:
Tomorrow Redux:

Truthsufer wanted to remind everyone:
Free Comic Book Day is THIS SATURDAY!

Bring your friends, your family, your friends' family, and your family's friends! Pack those stores!If you're not sure which stores in your area are participating, head over to the Free Comic Book Day website and check the FCBD Locator at www.freecomicbookday.com 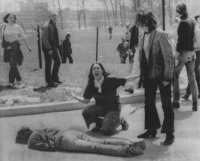 Neil Young, Ohio.
Tin soldiers and Nixon coming,
We're finally on our own.
This summer I hear the drumming,
Four dead in Ohio.

Who Sez you can’t teach an old dog new tricks?
Music legend Bob Dylan has embarked on a new career, by becoming a regular DJ on US satellite radio service XM.

New Court Jester
What I wouldn’t give to have been in his shoes!
If you haven't seen it yet, you need to watch Stephen Colbert's hilarious routine at the White House Correspondents’ Association Dinner. Political humor is always best when virtually nobody present laughs. We need to fund a new government position of Court Jester.

What I wouldn't give to have been in their shoes (Part II):

Rumsfeld is heckled...
The seven protesters,
members of CodePink Women for Peace

Makes me smile every time I see it...
"You go -give him heck.say a word or two for me!"

Here's a heckle link: (in case anyone needs to brush up) and video

The Ninth Gate of Hell:
Step one is admitting you have a problem
This is just embarassing. So, a quick recap: despite Limbaugh having an arrest warrant issued for him, paying $3,000 in bail, having his mug shot taken, and the supervisor of the jail-the place where you go when you are arrested- saying he was, in fact, arrested- Limbaugh wasn't actually arrested.

The Fifth of Never
Say, Let give everyone $100 gas kickback to keep them happy and voting for us.
Posted by mnsky