This week closes out a particularly hard week with being so very busy, fighting the flu and caring for family. It got me to thinking about those less fortunate and I realized that unlike 'them', it is possible for me to 'get out of the state I'm in'. So without further ado, I give you Friday's less Fortunates"

All Far Right Bloggers
Bite me or cry me a river...it's all the same to them:

'Reading far-right blogs, one would never have guessed that the GOP holds the White House, Supreme Court, U.S. Senate, U.S. House, State Senate and State Assembly. Some have struggled to understand why those on the right could be so unhappy with their nearly ultimate power over State Government and their absolute power over the Federal Government.' hat tip to the Wisconsion 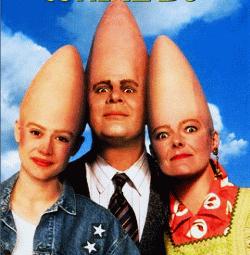 Coneheads
Saying ""We are citizens of this planet." won't get you far with the current administration. Hopefully extra-terrestrials from Remulak don't crash-land their UFO over New York's East River (or anywhere else in the USA). I just don't think Beldar from France is welcomed in the U.S.A. Maybe we can built a big bubble to fence out any outerspace illigal aliens.

Democrats in Connecticut
Keeping in mind you get the government you deserve:

"The majority of Democrats say they support Sen. Joe Lieberman in spite of his backing the war, since Iraq, after all, is only one of many issues facing voters. Hello! To characterize the most monumental screw-up of our times as "only one of many issues" is like admiring the theater marquees on Broadway with King Kong on the loose."- Lowell Weicker, in Hartford Courant op-ed.

Get Out Of The State You're In
Utah, Wyoming and Idaho:

President Bush . . . has a positive job approval in just three of the 50 United States. This according to 50 separate but concurrent statewide public opinion polls conducted by SurveyUSA for its media clients across the country. Only residents of Utah, Wyoming and Idaho view the president favorably. -hat tip to

BTW This 'foriegn' video goes a long way in explaining Idaho and Utah...
but even I can't explain Wyoming!

You're out of control, the rivers that roll,
you fell into the water and down to Idaho.
Get out of that state,
get out of that state you're in.
You better beware.You're living in your own Private Idaho.
You're living in your own Private Idaho.
Keep off the patio,keep off the path.
The lawn may be green but you better not be seen
walkin' through the gate that leads you down,
down to a pool fraught with dangeris a pool full of strangers.

You're living in your own Private Idaho,
where do I go from here to a better state than this.
Well, don't be blind to the big surprise
swimming round and round like the deadly handof a radium clock,
at the bottom, of the pool.