It's Friday and I just want to get this out of my system and enjoy the long weekend. Now go have fun! 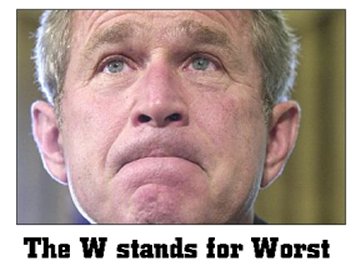 New Zogby Poll shows the cost of Freedom Under Bu$hCo:
75% said they trust government less than they did five years ago
5% said they think corporations do right by the consumers they are in business to serve
25% feel the reporting is fair and accurate in the newspapers or television.

Liar Liar Pants On Fire...There's lots more where that came from!

Bu$h Joke
President Bush said today he has nothing but respect for Mexico and its people and he will always speak the truth to them. Here's my question: When can we get that deal?"---Jay Leno

Visions Of Bush Ten Signs of the Impending US Police State.

Call Me, we'll do lunch? A New Turning Point in Iraq!
‘He wouldn’t have taken my phone call a year ago,’ Bush said Monday of the new Iraqi parliament speaker. ‘He’s now taken it twice.’ Wow, and it cost only $200 billion and thousands of maimed and dead American soldiers to get the president’s call returned.”

What I mean Saying "Bring it on." Kind of tough talk, you know, that sent the wrong signal to people.

Unchecked Power Makes Bush A Czar
President Bush has granted his intelligence czar the authority to exempt publicly traded companies from reporting requirements - in the name of national securit. He's above the law.