These Guys Are Bozos! 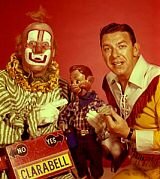 Say Kids, What Time Is It?...
Lew Anderson, who died Saturday at age 84, was known most recently for his big band's regular Friday night gig at Birdland, but in the 1950s, he burned his way into the psychic landscape of millions of boomer kids like me as Clarabell the Clown on the "Howdy Doody Show."

For those too young to remember, Clarabell dressed in a striped clown suit, big clown shoes, and a clown nose, and armed with a trademark bottle of seltzer to facilitate carbonic interplay, Anderson was a jolly, unpredictable presence on the Howdy Doody set.

Bu$h Clown and His Circus
Now a days, the Howdy Doody Show is no more. Taking it's place is the surreal media attempt at nightly news that is orcharested by big corporate oil profiteers. Bu$h has taken the place of Clarabell, but while unpredictable, he's not so funny.

'The plutocratic autocracy that is the Bush White House has been imperiously dismissive of America's Constitutional systems of checks and balances, attempting to govern by executive fiat. Now, we're beginning to see why Bush & Company are so fearful of any congressional, media, or public probing into their autocratic governance: These guys are Bozos! "