Supersize Soldiers: Too Fat to Fit?

A lean, mean force, or not!

Besides terrorists, germ warfare and nuclear weapons, military officials are increasingly worry about a different kind of threat... troops too fat to fight. Weight issues plague all branches of the military, from elite Marines to the Air Force, often lampooned as the “chair force” because of its many sedentary jobs. 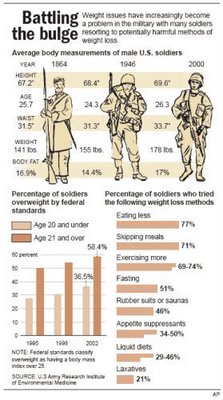 Today's soldiers are supersized, averaging 37 pounds heavier than their Civil War counterparts. Military officials say that's not all bad, because most of it is muscle, not fat, and the result of better nutrition. "Large and in charge" makes soldiers look more formidable to the enemy, they note.

Still thousands of troops are struggling to lose weight, and thousands have been booted out of the service in recent years due to not meeting the acceptable weight guildlines, (3000 in 2003).

"This is quickly becoming a national security issue for us. The pool of recruits is becoming smaller," said Col. Gaston Bathalon, an Army nutrition expert. Unless weight rules are relaxed, "we're going to have a harder time fielding an Army," he said.

Weight problems add stress to already stressful jobs, costing many soldiers promotions and leading some to try desperate measures like rubber suits and risky pills to shed pounds. Problems don't end when active duty does, either. The Veterans Affairs health system increasingly is strained by vets piling on pounds and developing weight-related diseases like diabetes. The diabetes rate among the services is nearly doubled that of the civilian population.

Why the weight increase? At this point most scientists agree that the problem is environmental: Americans are eating more and exercising less. We're working longer hours, immobilized at desk jobs. When we do have a break to eat, we're so strung out – and often so poor – that picking up some fast food is the easiest way to go.