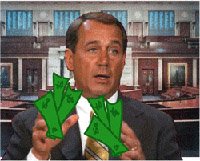 Kline, Kennedy and Boehner held meetings together in Minnesota that I attended a year or two ago - to 'explain' how successful the 'leave no child behind' program would be when fully funded. None of them knew when or how that funding would happen...now several years later Minnesota schools are still waiting to get funding for this failing federal mandate dubbed by most as "leave no child a dime".

I remember thinking at the time of the meeting that all three seemed to have the kind of 'tan' only those with lots of free time can afford...you know, by spending lots of time on golf courses. Seems like I wasn't too off base in my observation. Boehner's ethical past includes: his proclivity to attend fundraisers on golf courses in between forays along the K Street Corridor, as well as his tendency to speak on cell phones...John Boehner used his cellular phone in 1996 to participate in a conference call with Gingrich and other key Republicans regarding Gingrich's response to his ethics violations. Ultimately it lead to Boehner being disgraced and Delay raising in political power. Gingrich went on to resign.

The voting for the GOP leadership will be February 2. It is done in secret and details of the outcome are never revealed, so members are free to vote for their favorite candidate — even if they had promised their vote to someone else.

One of the most popular ways for the candidates to curry support is to buy it. It's an unspoken prerequisite that a candidate has to be an aggressive fundraiser who has campaigned for GOP candidates and, more importantly, has directed tens of thousands of dollars to the campaign accounts of his or her colleagues (you know like Delay and Abramoff!)...

Boehner and Kline...hmmm...As my mom would say, you're only as good as the company you keep.
Posted by mnsky