It's Friday, time to round up the usual rantings...

January 27 in Minnesota...50 degrees!
St. Paul's Winter Carnival...no snow, no ice, no 9 inches of ice to cut through to ice fish, no balaclava, no snow mobiles...no,no,no, aaagh

And the National Award in Fiction goes to: Bu$h's upcoming 'State of the Union' address...just how far can reality be exploided before it's a fictional work of art? U.S. economy grew at only a 1.1 percent annual rate in the fourth quarter, the slowest pace in three years. There are no coincidences in the universe.

Not only did President Bu$h defend the pictures of him and Jack Abramoff yesterday, he reaffirmed that the White House will not release them to the public (but I will!). Must be some dog ugly pics! 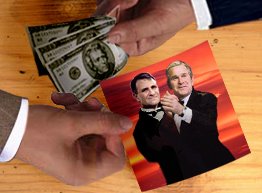