Minnesota's Governor Pawlenty has a plan to help crack down on illegal immigration in Minnesota. The Pawlenty foolish plan is about as real as one of the plots from the Roadrunner-Wiley Coyote cartoon!

Pawlenty’s the plotting Wiley Coyote who unveils his double secret ACME gear to catch the illegal immigrant Roadrunner and then…oh heck…we all know how the story ends…beep, beep. 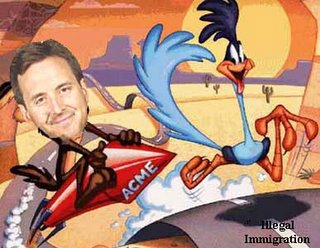 Did I mention that Minnesotans will be picking up the cost for the ACME illegal immigrant catcher missile? Tax, Fee or Beep Beep.

Play along is it a New Tax, Fee or Beep, Beep?
--Create a MN Enforcement Team (paid for by what?)
--Allow new 10 Officer Team to enforce state and federal law (paid for by what? Doesn't INS have task forces?)
--Prohibit 'sanctuary laws' (Is the INS going away? We have so much money we can duplicate efforts?)
--Enact new and increased penalties for human trafficking and False IDs.(At what cost? Who pays? Does this stop the activity? Do criminals pay these types of penalties? Is your underaged son/daughter with a fake ID trying to buy beer going to facing felony charges?)
--Record the country of citizenship and immigration status of suspects arrested in serious crimes.(Why not convicted of serious crimes instead of just suspects? And how will this be used? How will it make us any safer since it's after the crime?)
--Impose fines of up to $5000 on employers of illegal immigrants.(Is that each immigrant? What's in place now? What will it cost to enforce this? What if the illegals present fake IDs to the business? What will be the limits? How will this impact MN business?)
--Noncitizens immigration status on Driver licenses.(And this does what? Will it make roads safer to drive? Won't it make illegals who now have a license and drive to work/school/store... more likely to bypass learning driver laws, passing a test, and getting a license...and to just get fake driver IDs?)

Just how costly is it to built and maintain prisons? How much resources does our legal system take away from other areas like education? What kind of message are we sending in regards to tolerances and acceptance?
Posted by truthsurfer