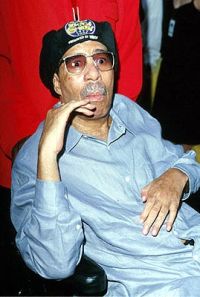 In the 60's and 70's, anything Richard Pryor did seemed to support an irreverence that poked itself in the eyes of the establishment... Especially Nixon and bible thumpers. He was willing to laugh at what he was and how others framed him.

For weeks after he released a new routine, everyone would mimic it. His art both provoking and entertaining but often edgy just beyond acceptable...Still, Richard had a little boy's charm that made us forget what went before. Yes I know he was self destructive, hot tempered, a brawler, homemaker, drug, boozer...All of which made him and his comedy more shocking, more tragic, more real.

Richard just recently (Oct) got the Mark Twain Prize. He had trouble and others present had to accept and talk for him, but he knew and commended "It's nice to be regarded on a par with a great white man -- now that's funny!"

Toward the end of "Richard Pryor: Here and Now" he does a bit about Hell. "Had so much fun they kicked me out that motherfucka," he says, looking simultaneously mischievous, embarrassed and smug. "I know I ain't goin' to heaven, I'm just going."

I guess I'll see him down the road some.
Posted by truthsurfer