The New York Times had a full page ad from the ACLU calling for a special counsel to investigate Bush and the NSA warrantless electronic surveillance. President Bush has acknowledged giving explicit and secret authorization for warrantless electronic eavesdropping and physical searches by the National Security Administration.

The actions of the president, the FBI and the JTTFs are part of a broad pattern of disregard for the rule of law in the name of national security.

According to the ACLU press release, President Bush's actions are a clear violation of the Foreign Intelligence Surveillance Act (FISA). 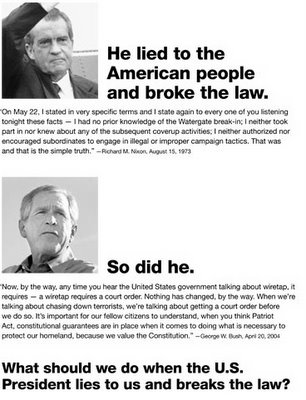 "President Nixon was not above the law and neither is President Bush," said ACLU Executive Director Anthony D. Romero.

"President Bush cannot use a claim of seeking to preserve our nation to undermine the rules that serve as our foundation. The Attorney General, who may have been involved with the formulation of this policy, must appoint a special counsel to let justice be served."