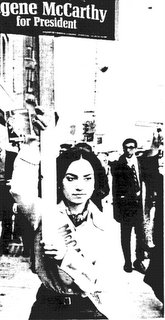 Eugene McCarthy's political career was launched using the mimeograph machine at the College of St. Thomas in Saint Paul MN, where he was a professor of economics and sociology. He won what most said was an unwinnable race, and was elected to the House of Rep. in 1949. He was the first member of Congress willing to stand up and debate the anti-Communist Irish bully, Joe McCarthy.

Through the years, he took on many bullies not the least of which was the vietnam war. He was quiet, thoughtful, and purposeful, speaking out with heart on causes like healthcare and welfare. America is far better today because Eugene McCarthy took his ideas to the people in open debate, campaigning and speaking.

To paraphrase his famous 1960 nominating speech of Adlai Stevenson, McCarthy was a favorite son not of any state, but of many states of mind; not of any one short-term campaign, but of the longterm campaign for rationality, responsiveness, and dedication by government to raise the living standards and security of the American people.

The press dubbed him Clean Gene when he ran against the war in Vietnam. The Needle was his nickname on Capitol Hill, because of his quick and wicked wit. The poet Robert Lowell declared him, "A One-man Greek Chorus."A friend says, "He is Renaissance Man Super-squared." But I like to think of him as just another Minnesotan with 'Minnesota values'.
Posted by truthsurfer