When Violence Hits Close to Home

October was National Domestic Violence Awareness Month. What's that you say, you missed it? So did most of us because for the most part, the media chose to ignore the issue. That makes the media coverage of Minnesota's Rep. Mark Olson arrest this week for domestic abuse even more ironic.

Mark Olson, a Big Lake-area legislator recently reelected to his eighth term, was charged with fifth-degree domestic assault for hitting his wife (forcing her to the floor). Instead of using it as an opportunity to educate the public on the epidemic level of abuse in America (and Minnesota), the media has instead made it into just a problem for Olson his political party.

But it’s a lot more than just another story. Not when domestic violence accounts for over 25% of the crimes reported in Minnesota yet we know that 80% of all domestic abuse goes unreported. The story of Mark Olson is played out everyday over and over again in Minnesota’s homes.

Given Olson’s past aggression against a women and his refusal of treatment, his current punishment should be the maximum that can be given by both the court system and his legislative peers.

Orvell’s Grave has a good perspective on this issue and well worth the read especially for men! 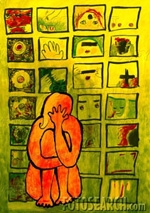 Most men in this country are not violent, most do not beat their wives and girlfriends. Despite that fact, domestic violence is really a gender issue. Men commit 90 to 95 percent of domestic violence acts. I think most men instinctively know this is true, but most men find it really hard to talk about it, think about it, or much less do anything about it.

Some men believe that because he is not violent or it's not happening in his family, he needn't do anything. Some men believe it is a "woman's" issue, so he can really ignore it. Some men can't imagine talking about this issue with other men, some of whom he might suspect are abusing women in their lives.Let's face it. This is an embarrasing issue for men. It's much easier for us to simply let women try to take care of this problem. It's really hard for most men to admit that this is our problem.

Violence against women is men's violence. Can we find a way to help men own this problem and work together to solve it? How can we end the pervasive silence? How can we help our communities get past the attitude that this happens someplace else, certainly not where we live?Given the prevalence of male violence against women, why has this not been a very public men's issue. Isn't it really in men's self-interest to address gender violence? Don't most of us really care about the women and girls in our lives?

Ignoring violence, not responding to it, looking the other way, or worse yet treating it like an isolated act flies in the face of all we know about domestic violence. Here are some facts about domestic violence in Minnesota. After you read it, have a heart to heart with the women and girls in your life. They deserve respect and a safe place in our culture:

Wow, some of these facts point to a problem in our culture. I had no idea of the depth of domestic violence.

yes, I was disappointed that the DFL didn't take the opportunity to point out the degree to which domistic violence is a problem. The decision to take the 'high road' against Olson is one thing but not to use the opportunity to both enlighten and help women seemed out of character for the 'grassroots' leadership.