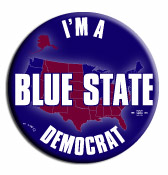 In CD2: Coleen Rowley was a long shot even from the start for a number of reasons but….John Kline’s days are numbered. We’ve shown we can make in-roads in CD2 by picking up several new seats in the MN house and senate. So what was once red is now a violet and will be blue shortly. This race will come down to (a) money, lots of it to fight off Kline's sleezy negative campaigning (b) committment, from the old guard politico (3) a candidate with Coleen's credentials: strong in NS issues, ethical, and supportable by the grassroots. Coleen says she won't run again, but in life, things can change.

Here’s the gains from tonight: MN HOUSE
Democrats in CD2 have added 6 seats!
Kept: Joe Atkins 39B and Patti Fritz in 26B

Some thoughts on the State Level:
Okay, there’s some kind of Democratic governor curse. Hatch should have taken it. And maybe next time besides doing the whole white guy old guard union thingy, whoever runs for Governor will also reach out to the grassroots & netroots activists. (yes Hatch I'm talking to you!) I’ve talked with so many local grassroots activists that were never brought into his campaign. I believe they alone would have carried him over the top. It’s not enough to have us vote, you need us to network out and bring in the independent and leaning voters. Just my 2 cents.

Congrats to all the new Democratic constitutional office holders: Swanson, Ritchie, Otto. Each one of them intelligent - well deserving of office-ran good campaigns and have great credentials!

Amy Klobuchar is the first women MN has elected to the U.S. Senate. Hopefully she’s starting a new trend both in MN and the US. We could use more strong women in office.

Keith Ellison the first African American/Muslim, Minnesota has elected to Congress. And…Keith is the very first Muslim in Congress! He’s breaking new ground all the way around. Once again, Minnesota is again showing its politcal firsts on the national scene.

Tim Walz took it to Gil and help win control of the House away from the Republicans. I look forward to his congressional future.

I guess I’ll never understand who would vote for Bachman. She’s insane. And certainly given the choice between Patty Wetterling and insano…this is one race where I’d have to question either the drinking water in that district or the election itself…
Posted by truthsurfer

Kline's days are numbered? Are you on drugs?

In case you didn't notice, you ran a former Time Person of the Year in the worst election cycle for Republicans in 32 years, yet she did worse than a Burnsville City Councilmember did 2 years earlier.

I don't know what you're on, but I want some.

Right and it only costed Kline twice as much dirty money!