I Think For Myself On Fridays

And because I think, I'm Democratic!
Oh yeah, have a great weekend.

How Democrat Are You?
What? You mean to tell me that the ‘party of personal responsibility’ would stoop so low as to collect tax payer government funded unemployement. I’m shocked! (okay not really) As CL says:

Hard-core conservatives who have spent the last year telling us that the economy is robust are now having to get in line side-by-side with those "lazy, entitlement queens" they've maligned. How bad are those socialist programs now, kids?

Ribbit, Are we cooked yet? Where's the wassabe?

Should we go or should we stay? The evangelical Christian community is pissed at the GOP for not having fulfilled their promises on abortion and gay marriage. And the GOP can't figure out how a keep stringing them along. "Come on, just one more vote for us and we'll give you the kingdom of g*d here in America...really!" It's a dilemma alright, almightily. Perhaps if the GOP prey on more of the over-moral sunday crowd, they'll wake up.

Aren't you glad Howard Dean works for Democrats? We're winning because of him and those that work toward his vision like DFL State Chair Melendez. We have an agenda, a plan, a goal and a message. They all support the Democratic vision. 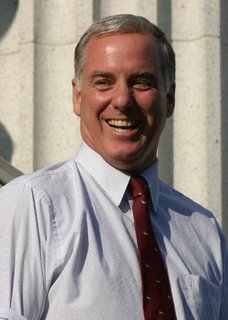 Dean stuck to his principles in rebuilding the party. He and his supporters in the netroots movement believed that their party needed to rebuild from the ground up in every state, including many where the party existed in name only. Here in Minnesota that kind of committment has made all the difference. In the area I live in (south suburbs) we've put Democrats into office after hearing for a whole year that we lived in too red an area to elect democrats. Well, we're a very bluish violet today.

Thank you Mr. Dean. All the long hours and endless lit drops and doorknocks were worth it if for nothing else than the soon-to-be ex RNC chair Ken Mehlman.
Posted by truthsurfer