The fact that this administration including Rep. John Kline (who recently slipped in a clause to

remove federal oversight of the Iraq reconstruction), would allow a government website to contain nuclear bomb making instructions (pre-19991) shows just what depths this group of crooks will sink to for political power. They were willing to give away WMD to score a politcal point. This is not American leadership. We've had example after example of how Republican's have traded our security and safety for personal or political gain.

"The idea that you'd allow this stuff to go up without censoring it, looking at it carefully, just throwing it up and leaving it up there for March on, without knowing that you have material there that could provide our enemies with needed information for them to produce the kind of weapons that the article describes here is the height of irresponsibility," Dodd said. "And it was all designed to do one thing, and that was to help them out politically, disregarding the national security implications."

Near as I can tell most Republicans like John Kline are corrupt. They have involved us in a war by lying and giving false data, with no planning and now with no end in sight. They have removed oversights and protections and placed themselves above the law. They have voted for big business over American interests, the country's best interests, and our children's future. And when confronted with the results, they blame Clinton, or the victims (war civilians), or nature (katrina). 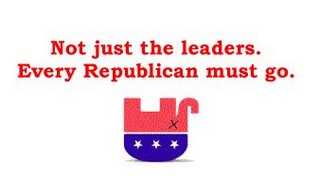 They all need to go. Let's start by electing candidates that will make decisions in our best interest instead of war profiteers. Let's elect candidates that are moral, truthful and have our Minnesota values.

There's plenty of good value-based Democrats. They have made a committment to change the course Bus$hCo has put us on, and return to the programs and policies that made America a leader among all countries.

This Tuesday let's clean house! It's time to vote as if your life depends on it.
Posted by truthsurfer

Just trust him...Bush had very good reasons for sharing A-bomb instructions with any terrorist with an Internet connection:
http://joecrubaugh.com/blog/2006/11/04/top-10-reasons-bush-posted-nuclear-bomb-cookbook-online/