Thursday's Child Has Far To Go 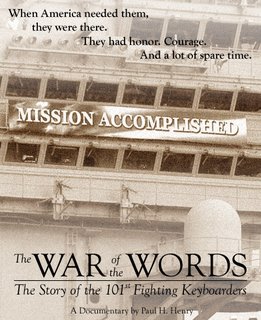 This one goes out to the boys at Minnesota's right lean (but not right!) blog:Powerline…and their misguided netroots… 'Remember grasshoppers, just because you claim it so, doesn't make it so'...as time and more time again has proven. The amazing thing is reality and truth doesn't seem to change them, but then again, maybe it's not too surprising.

What's that smell?...ah the faint odor of expendability!

I knew when Minnesota's weasel, smilin' Norm Coleman, sent me a lukewarm reply regarding tossing Rumsfeld overboard, it would just be a matter of time for the 'piling on' to finish him off. Imagine this: two retired senior Army generals who served in Iraq and previously voted Republican are now openly endorsing a Democratic takeover of Congress.

"Democratic control of Congress could be the best way to wrest control from the Bush administration and steer the United States away from a gravely flawed strategy in Iraq."

All along the government should have let the generals run the war. It’s what they’re trained for instead of Rumsfeld and the rest of the Bu$hCo Armchair Chickenhawks. Rumsfeld is just the start...the first falling republican domino is a long line of dominos.

Dead Eye Dick the Torturer vells:
In a radio interview Tuesday, Vice President Cheney confirmed that detainees were subjected to water-boarding: "Q Would you agree a dunk in water is a no-brainer if it can save lives?

“It’s a no-brainer for me but for a while there, I was criticized as being the Vice President 'for torture.' We don't torture. That's not what we're involved in. We live up to our obligations in international treaties that we're party to and so forth. But the fact is, you can have a fairly robust interrogation program without torture, and we need to be able to do that."

Maybe Dick should study up more on why torture is usually not effective and why someone like him may support it. (say isn't his time about up?) 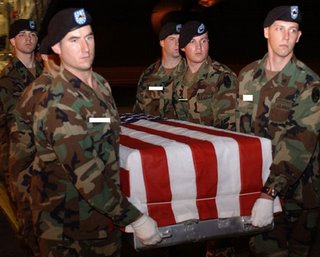 No longer staying the course, Bu$hCo now is now spinning the course. How about this, just get off the whole g*ddamit course? Could you do that?

And then start on Afghanistan where we appear to be failing to win the hearts and minds unless killing them can count as a win.

If you made it this far, go see David Bowie's Thursday's Child, 'While seeing your past and letting it go...Only for you I don't I regret that I was Thursday's Child'.
Posted by truthsurfer

Look closely at the faces of the men carrying the casket. They are young, so very young.

This, my friends, is the face of war. Young, so very young.

Yes, the old make war and send the young.Perhaps if they had to serve side by side, they would be circumspeck. It's interesting that those that most support the Iraq war haven't ever served in war.