File this one under Liar and Loser 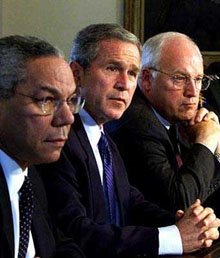 Colin Powell is now claiming he was fired…
And maybe he was but it wasn't for the correct reasons... like lying to Americans, manipulation and doctoring of data, and presenting false reports that lead us into a war.

Whatever he says now may or may not be the truth; He should have spoke out then before he betrayed us.

Don't you think they’ll all be trying to distance themselves from this administration if for no other reason than to stay out of jail.

Don't forget...
he could have served America... but decided to serve Bu$hCo.
Posted by truthsurfer