The US terror alert has now become a political football for use by Bu$hCo. It's not a 'credible source' but managed to make the headlines as breaking news: 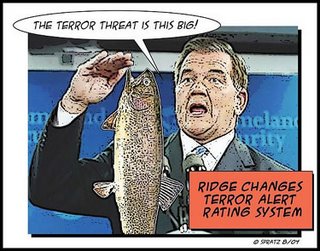 "A Web site is claiming that seven NFL football stadiums will be hit with radiological dirty bombs this weekend, but the government on Wednesday expressed doubts about the threat."

Even the Dept. of Homeland Security doesn't see it as a credible threat. The alert was sent "out of an abundance of caution." Which begs the question, then why issue a warning at all? Could this be part of Rove's promised October surprise?

Let's think about it, first, why let terrorist know you're on to them by issuing an alert with details. Don't you think they read the papers and watch TV? Do you think if it was real, they might go to plan B since plan A is now in the newspapers?

Secondly, if there is no threat as the FBI and Homeland Security both maintain, then why the warning? "Counter terrorism investigators said the threat is not credible, and they're urging fans to enjoy the games."

Like all the numerous previous warnings that came before elections, this terror pigskin stinks of the Rovian fear tactics that has served the Bu$h administration in the past. I'm just on pins and needles to see the terror scale reach red by Novemeber 7. Which reminds me of an old joke that seems fitting to this whole affair:

After a complete analysis, FBI forensic experts determined that the white substance unknown to players was the GOAL LINE. Practice resumed after special agents decided the team was unlikely to encounter the substance again.