When Silence Is Betrayal

Coleen Rowley risked her career, her standing in the community, and her reputation to speak the truth. Isn't that someone we want in Congress? 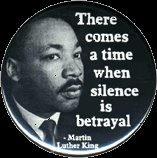 Another FBI agent in 9/11 case points to negligence and backs up what Coleen Rowley has been saying all along.

"Samit's recollections and frustrations were the first ground-level account of how FBI agents in Minneapolis where Moussaoui was arrested on a visa violation three weeks before the attacks, were appalled that supervisors in Washington would not support their attempts to obtain search warrants to find out why the 37-year-old Frenchman was taking flying lessons and what role he might have in a wider plan to attack America."

"Samit's suspicions have been backed up by Coleen Rowley, then an FBI lawyer in Minneapolis, who has also complained that Washington was blocking the Minnesota field office's attempts to determine what Moussaoui was really doing."