Merry Friday, Stay dry and have fun this weekend.

The Peeps:
Every year the Pioneer Press has a Peep Diorama contest. And every year my friends enter.

From the start, our art had a bumpy start. In 2004 we were told that our entry got lost in the mail...fortunately we had a signed receipt (surprise!) to prove otherwise. However it took several emails (and a few threats of sticking things where peeps shouldn't go to get the 'pp' to acknowledge they had gotten our entry.) I believe Jesus the peep hanging on a cross won that year. They did finally post our diorama but too late for the judging.

In 2005 they receive out entry but once again I think Jesus the peep won for the last supper (are you sensing a theme here?) This year we hope to be aknowledged and we hope that we are not censored (again). Clearly this is fine peep art that happens to have a fine message for basic human rights. 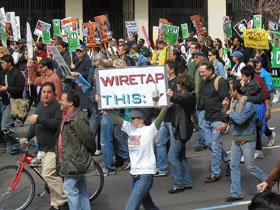 What's the difference between an "insurgent" and a "death squad"? Seems that it's whether or not your ultimate nominal leader is Osama bin Forgotten, or Preznit Sniffin' D. Coke

CD2 Congressional Run Down:
Marko dropped out of the congressional race clearing the way for Coleen Rowley. Amid low delegate counts and rumors of a first round endorsement for her opponent, Marko decided to face reality. Ever the 'what's in it for me' Democrat, Sharon decline to support Coleen. Her supporters are following suit by posting up over at Backbone. You can almost hear the whine of sour grapes from here!

It's all True!
What we’ve been saying about the Iraq invasion: All true.

And so on. What we're seeing in Iraq is far more horrific than your garden-variety modern-day civil war. It truly, honestly, isn't a matter of debate anymore. As for temperature, it's already twice to three times as hot of some of the most recent, deadliest civil wars.

This Week's Moonbat for God:
Yesterday, Rev. Scarborough said this about Tom Delay:

"This is a man, I believe, God has appointed ... to represent righteousness in
governmentt,"

Geez, the Rev. could be considered the sane one in that group...Stand clear! It could be catching?!
Posted by mnsky