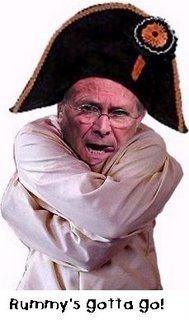 Keith Olbermann replies to Donald 'Quack' Rumsfeld and the rest of the neo-cons wanting to now label dissent with the new and highly coordinated buzz phase “supporting fascism”… transcript:
"The man who sees absolutes, where all other men see nuances and shades of meaning, is either a prophet, or a quack."

Yes there is fascism. But the Bu$h’s administration has removed most of my freedoms and liberties not the majority of the population that says it's time to leave Iraq. And if you say ‘it can’t happen here’, wrong., it already has happened here.

Remember: President Bush has quietly claimed the authority to disobey more than 750 laws enacted since he took office, asserting that he has the power to set aside any statute passed by Congress when it conflicts with his interpretation of the Constitution.

What does that make them? A must see: Video - WMV Video - QT
Posted by truthsurfer

I am so glad you posted this, it is really an amazing clip.