Peter Hawkins died recently in Britain. His name isn't exactly a household one, but he is well-known for one word, delivered in a grating monotone screech:"EXTERMINATE!"Yes, Hawkins was the voice of the Daleks from the old BBC series "Doctor Who." Cheap cheesy special effects and all, I love the show…but talking about exterminations… 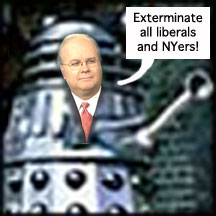 “We are now in a process of renewed escalation,” a senior Israeli General Staff officer tells Haaretz. Signaling an apparent policy shift, “We will continue hitting everything that moves in Hizbollah — but we will also hit strategic civilian infrastructure.”

Nice, seems as though the Bu$hCo school of NeoCon's has spilled over into all of the Middle East. And Rice-a-roni with France has decided the fate of all involved. Besides being damm near mind numbing like the dalek's stun ray it's stinks of a B-grade sci-fi...

And talking about more sci-fi ...and naturally more killings:

Maybe when we’re all done giving Iraq some of our ‘democracy’ they will have more ‘freedom’ to kill more shopkeepers who ‘suggestively’ arrange the produce.

The very fact that it is perfectly possible shows how bizarre the whole killing sprees are and the pretexts for for them. The only freedom we’ve given Iraq is the power to kill…just like the US soldiers. Maybe we're all starring in our own Dr. Who, but just don't know it.
Posted by mnsky