GOP Stick A Fork In Kennedy 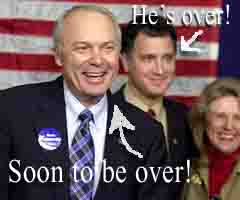 "It over for Mark Kennedy"

- Congressman John Kline's top staffer from his Burnsville office said when asked about the Mark Kennedy/Amy Klobachur campaigns at the MN State Fair on Friday.

In an attempt to put more lipstick on this pig, Kennedy released his 4th ad in as many weeks.
MN Publius does him a favor by making it so that it complies with the affidavit he signed when he renewed his CPA license

Can Kline be far behind given his lackluster debate presences during the Jason Lewis Show and the series of muddy/fuddy attacks against his challenger Coleen Rowley?
Posted by truthsurfer