GOP Gubernatorial candidate Tom Emmer = Missing votes, Missing Debates, MIA on DWI
Emmer is passing on debates because "there have already been a lot of debates'...hmm...resorting to his standard behavior of skipping out of work! Missing a major debate is similar to missing important votes. It shows a repeated pattern of a lack of reliability on Emmer's part for playing by rules.

"There is no better opportunity to explain why you will be a champion for rural Minnesota than by debating the other candidates for governor in front of the mayors, city council members and city staff that make up the Coalition of Greater Minnesota Cities," said Timothy Strand, the mayor of St. Peter and the group's president.

Emmer's lack of discipline is only matched by his lack of respect for Greater Minnesota. By being MIA from the Greater Minnesota debate, Emmer is resorting to his old established behavior. His history speaks volumns about why he can't be depended on to even show up!
Minnesotans will definitely not miss Emmer when this election is over especially when he can't take the time to debate the other candidates. 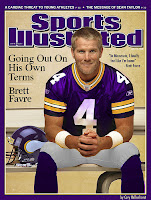 Looks like Brett Favre is back with the Vikings. Does this mean we have to fight building him a millionaires/billionaires sandbox to play in?  I guess if you're Independent Gubernatorial candidate Tom Horner  or GOP Gubernatorial candidate Tom Emmer you support the money for a new stadium. Democratic Gubernatorial candidate Mark Dayton is still undecided as to how a stadium would fit in...if it would...
Personally, I support education, roads, parks, water quality, jobs, health care, day care, transportation....and when all that is paid for, if there is anything left over...well let's just say in the current economic down turn, a new stadium isn't very plausible espically without balancing the budget! I like the game as much as the next guy but I'm not willing to trade my kids future for the self gratification of building a stadium for billionairs while millionaires play...
Posted by truthsurfer

How many times have you heard the question : Will he, or won’t he ?

Have you seen a debate yet that you didn’t question this man’s temperament ? I’m afraid that if you asked him the time of day that he would go off on to a rant about government dictating time zones interferes with the free market concept that businesses are best to decide for themselves.

Seriously, it’s a smart strategy … the audience for the Coalition of Greater Minnesota Cities debate would be small and the surely there would be questions on LGA (and his Lt. Gov. writings) ... this is not a debate that he would shine.

I suppose the other “will they or won’t they” question would refer to a Vikings stadium … it should not be a question of will one be built but instead how, and who will pay for it. The Tom Bakk proposal makes some sense. However, it will take Governor that wants to make that happen.